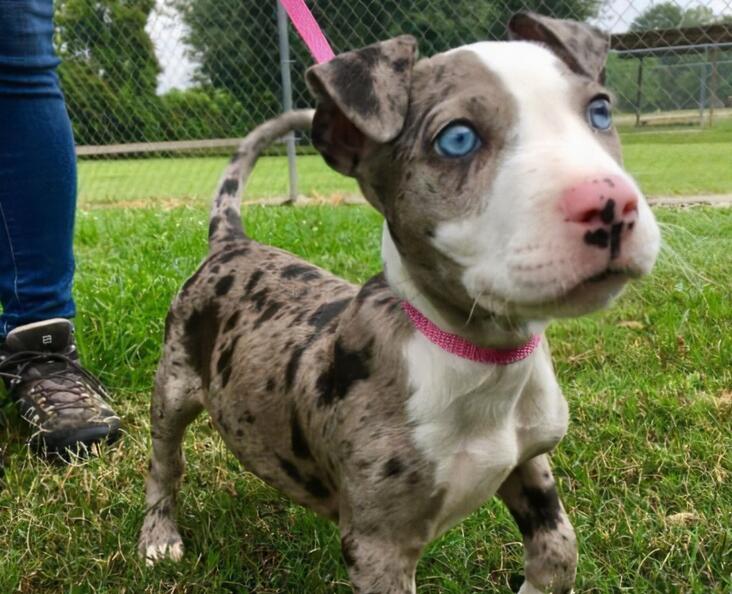 The Merle Pitbull has become increasingly popular in recent years. It is a loving and affectionate breed that loves to be around its family. They are very loyal and protective, which makes them great family pets. They also have a strong working drive, making great companions for people who enjoy outdoor activities such as hunting, running, or agility training. This article will discuss some important information you need to Know about Merle Pitbulls.

What Exactly Is A Merle Pitbull?

Merle Pitbulls are simply pitbull-type dogs whose coats have been affected by the merle color mutation, which often leads to blotchy swirls or patches of irregular coloring.

Their merle gene is responsible for the patches of lighter fur in the coat, usually in shades of blue, grey, and brown. This can cause their eyes to be a different color than normal. The gene can also create a “double-coat” effect where the fur on the head and legs is darker than the rest of the body.

One thing is for sure: this distinctive pattern isn’t everyone’s cup of tea.

Some dog owners adore it, and it receives strong opinions from others. Since its introduction, merle has been the subject of much debate in the canine community. And this doesn’t just limit to Pitbulls.

In addition, the merle gene affect more than just the Merle pit bull’s physical appearance. The dog’s health and way of life may be affected by some of these alterations. They tend to have a great deal of energy and require plenty of exercises to stay healthy and happy.

The merle mutation doesn’t change any vital stats of Pitbulls. This group of dogs includes many breeds with varied physical characteristics.

Here is a quick look at the American Pit Bull Terrier – one of the most popular pitbull breeds:

It is worth noting that the American Kennel Club (AKC) hasn’t recognized American Pit Bull Terriers.

The closest we can get is the American Staffordshire Terrier, another popular pitbull breed that the AKC has accepted for decades. It has similar traits to the American Pit Bull Terrier:

Regardless of the actual breed, the appearance of merle Pitbulls is pretty much the same.

Though only medium in size, these dogs pack quite a bit of muscle. They feature strong jaws, a big wedge-shaped head, a huge neck, and a broad chest. Their thighs and paws are big, while the tail has a wide base and a thinned tip.

For those unfamiliar with dog coat patterns, Merle fur coats, in general, often have a patchy look with mottled splotches. Some patches have diluted pigment, while others are fully pigmented. They generally consist of reddish- or bluish-gray mixed with reddish- or black-brown.

In addition to the base coat, this mutation can also affect the colors of the eyes, paw pads, and nose of a pitbull dog. The pigmentation of their eyes is controlled by the same gene that determines their fur color. Their eyes may be a beautiful shade of blue or a strange combination of colors like blue and brown.

Blue merle coats are the most common color among merle Pitbulls. They result from a merle gene interacting with the black coat color.

These dogs will have blue patches and white markings formed on a black coat, with the blue color varying from light to much darker shades.

The distribution of patterns in red merles is comparable to that of blue merles. However, they don’t have “red” patches.

What is called “red” is, in fact, black and brown patches – the outcome of double dilution. They happen on live coats and are much rarer than blue merles.

There is not much change in temperament between merle and regular Pitbulls.

These fearless and protective dogs are known for their friendly nature and playful temperament. Pitbulls are very athletic and have a great desire to please others.

Initially raised for dog fighting, they have a strong prey drive. This doesn’t mean Pitbulls are naturally hostile toward humans and other dogs. With early handling and socialization, you can train them to restrict themselves from unnecessary aggression toward others.

What Makes A Merle Pitbull?

The coat color of Pitbulls is inherited, just like every other aspect of their appearance.

In particular, what governs the merle pattern is a SINE insertion in the Silver (SILV) or PMEL17 gene. You can casually call it the merle gene. This dilution gene doesn’t produce a distinct solid coat color but rather lightens the primary coat color in different shades (often red or black).

Some unusual coat hues, such as blue, liver, or lilac, are caused by other dilution genes. Because they dilute all primary pigment, a dog with a dilution gene will not have black hair or skin.

The Merle gene, on the other hand, functions quite differently.

Some portions of the dog’s coat will be diluted unevenly, resulting in various colors. The coat color will be white in those areas where the pigment is diluted. On others, it will produce a watered-down shade of blue or red.

The dog’s eye color will also be altered in the same manner. Because of this, merle dogs may have a wide range of eye colors, including entirely or partly colored eyes. An extreme outcome is a heterochromia, in which one eye has a different color than the other.

The merle gene is also the dominant gene. Only one copy from a parent is enough to see these effects on the coat of their children.

Merle vs. Brindle Pitbulls: What Are The Differences?

Brindle is another dog coat pattern that is much less random and more uniform than merle.

Pitbulls with brindle coats have a unique pattern that looks like tiger stripes, but the color changes are more subtle and blended. Most of the time, shades of red make up the base color with black stripes on top of it. But the color can be very different depending on the other coat genes.

The coat patterns of a merle and a brindle pitbull puppy are drastically different, making it simple to tell them apart.

Dogs with a brindle pattern resemble tigers in their brown and black stripes, while the merle pattern has spotted patches. Merle dogs usually also have another unique trait, such as blue or two-toned eyes. Brindle pitbull are less likely to have these eye colors.

Here are some of the most issues that happen more often on merle Pitbulls:

Their nutrition, level of physical activity, and environmental exposure also have a role in developing other health issues.

When breeding merles, these genetic traits should be taken into consideration. A merle should only be mated with a non-merle dog of any color since health problems are more common and severe in the offspring of two merle parents.

Merle Pitbulls make great family pets, as they are often very tolerant and loving towards children. They are also renowned for their athleticism and agility, making them great candidates for the gun dog, skill, and obedience sports.

With proper training, they can become excellent companion dogs and will be loyal and devoted to their families.

What is The Average Lifespan Of Merle Pitbulls?

Like other pitbull breeds, the Merle pitbulls can live between 12 and 14 years. It isn’t rare for them to live even longer than that.

Remember that some health problems can shorten their lives and reduce their quality of life.

What are Merle Pitbulls worth?

Due to its rarity, Merle Pitbulls will cost you more than regular dogs. The price tag is anything between $15,000 and $30,000. In addition to this initial cost, don’t forget to consider the extra money you might have to pay for their health issues.

Most places don’t ban the breeding and sale of merle dogs. However, registering them in a kennel club can be a big headache. Some, like the American Kennel Club, don’t recognize the American Pit Bull Terrier breed. There is a high chance of you ending up with a shady breeder.

Merle Pitbulls are rare nowadays. You will have a harder time finding and adopting one of them, which is why you do not see many of them on the street.

When it comes to the rarest pitbull colors, you’re likely to hear about blue-nose Pitbulls and “tri-color” Pitbulls.

Blue nose Pitbulls get their name from their bluish-grey noses and lips. They also have steel-grey or blue-ish fur, and they tend to have blue or grey eyes. Because they are so rare, blue-nose Pitbulls are often sought after by breeders and owners alike.

The “tri-color” Pitbulls are also quite rare, and they get their name from their coats of three distinct colors. These colors can include white, black, and tan, but they can also include other colors such as red or blue. The tri-color pattern is caused by the merging of two different color pigments in the same hair follicle.

In addition to these two rare colors, there are a few other less common colors that you may come across in the pitbull breed. These include chocolate, silver, and champagne. Chocolate Pitbulls have a rich brown color all over their bodies, silver Pitbulls blend grey and white, and champagne Pitbulls have a light golden or beige color.

Overall, the Merle Pitbull is a fantastic breed well-suited to various lifestyles. With their stunning coats and friendly personalities, they make great additions to any family. 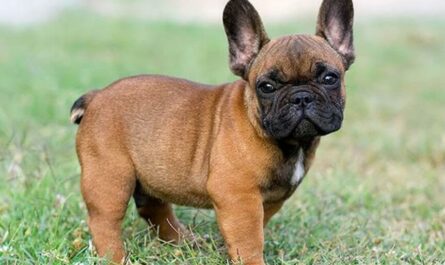 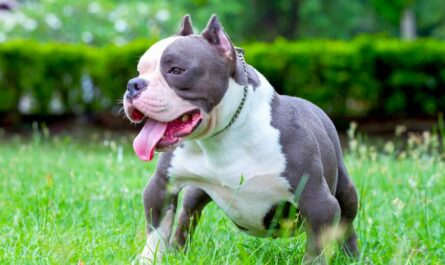 Blue American Bully: All Facts You Should Know 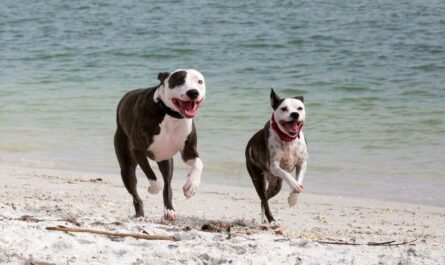 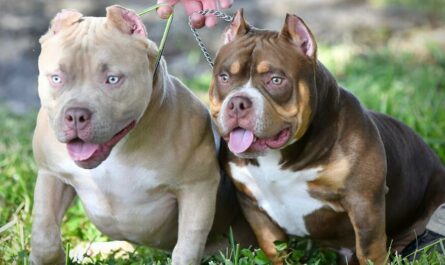